Would you like to switch to the accessible version of this site?

Don't need the accessible version of this site?

Can the lactating mother take more vitamin D in order for her milk to have sufficient vitamin D for the infant? 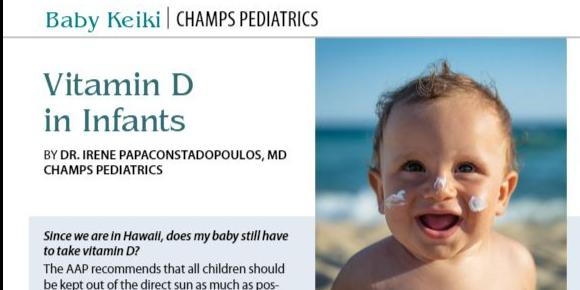 Common parent question: since we are in a state that gets a lot of sunny days in the year, does my baby still have to take an oral vitamin D supplement? The American Academy of Pediatrics (AAP) recommends that all children should be kept out of the direct sun as much as possible and wear sunscreen (after 6 months of age) while in the sun to avoid the long-term risk of sun exposure, which may contribute to skin cancer. Sunscreen keeps the skin from producing vitamin D. For that reason, ask us about the need for supplemental vitamin D drops.

As per the AAP, all infants and children should have a minimum intake of 400 IU (International Units) of vitamin D per day beginning soon after birth.

Although sold over the counter, excess amounts of vitamin D are toxic. Always discuss with your provider.

Can the lactating mother take more vitamin D in order for her milk to have sufficient vitamin D for the infant?

Rickets is a condition of softening of the bones that occurs in growing children. It happens when the bones can not take up enough calcium and phosphorus to make hard, healthy bone. Although there are genetic and metabolic causes of rickets, the most common cause is a lack of vitamin D. This is also called nutritional rickets.

What is vitamin D?

Vitamin D is a substance that the body needs to help absorb calcium from the gut and regulate how much calcium and phosphorus gets stored in the bone and how much gets let out of the body in urine by the kidneys. Vitamin D can be obtained by eating certain types of fatty fish and fish oils, but it is also made in the skin in response to ultraviolet rays of sunlight. However, one must be exposed to the right wavelength of sunlight for a substantial period of time to make enough vitamin D for bone health. The use of sunscreen (which is, of course, important in preventing sunburn and skin cancer) does not allow the body to make much vitamin D in the skin. For this reason, in the United States and many industrialized nations, cow milk (and infant formula) is fortified with extra vitamin D. Human milk is often very low in vitamin D.

What are the symptoms of rickets?

The most classic symptom of rickets is bending or "bowing" of the bones of the legs. This happens because of the stress of walking on "soft" bones that do not have enough minerals. Infants who are crawling but not walking yet can get widening of the area just above the wrists for the same reason. In more severe cases, one can see swelling of the ends of the ribs as well. Sometimes the blood level of calcium can become so low that seizures can develop.

How is rickets diagnosed?

A physician can diagnose rickets from a combination of physical exam findings, x-rays (which show widening and "fraying" of the ends of certain long bones), and blood tests that can show low levels of phosphorus and normal or low calcium with an elevated level of an enzyme called alkaline phosphatase. Your doctor may also check the level of "25 hydroxy" vitamin D. On occasion, further blood testing is necessary to diagnose other forms of rickets.

Who is at risk for nutritional rickets?

Infants who are breastfed and who are not given extra vitamin D are at highest risk. The risk is even greater if the baby's mother is also vitamin D deficient. Vitamin D deficiency among women of childbearing age is quite common. It occurs even more often in dark-skinned people and people who do not expose themselves to much sunlight.

How can rickets be prevented?

How is nutritional rickets treated?

Treatment requires high doses of either ergocalciferol (vitamin D2) or cholecalciferol (vitamin D3) to build up the body stores of the vitamin. The standard regimen is about 2000 to 4000 units daily for several months. It can vary based on the size and age of the child being treated. Some physicians use other regimens.

It is helpful to note that some forms of vitamin D (especially the liquid) can be expensive when obtained through a pharmacy and not covered by insurance. These preparations are available on the Internet at a cheaper cost. However, please check with your physician before ordering on the Internet by yourself.

Supplemental calcium is also needed to keep the blood calcium level normal and heal the bones if the dietary intake of calcium is not sufficient.

If the treatment is adequate, the x-ray changes start to resolve and the blood alkaline phosphatase normalizes in about 6 to 8 weeks. If the bowing of the legs has developed, it can take many months to straighten out, but it usually does improve.

Find us on the map

Hours of Operation (By appointment only)

"I can’t express how grateful I am, as a mother of two young children, to have found such a wonderful pediatrician. Dr. Irene is knowledgeable, accessible, and above all, great with kids! Even though my girls have had to be poked and prodded on occasion, they still love Dr. Irene so much that they get excited to see her again - and that’s saying a lot. If you are looking for a pediatrician who you can trust with your children’s health, who can answer your questions, who gets back to you quickly, and who herself is an amazing mother, then you’ve found her! I’m so glad we have. ❤️"

We love Dr. Irene with CHAMPS Pediatrics! My two daughters have been seeing her since 2018 and we trust her completely. She's extremely warm, understanding and takes her time to explain and answer any questions that you may have as parents. She is extremely fast with the text replies through the online portal (klara) as well, which is great for those forgotten questions in between visits. Dr. Irene is super sweet and efficient and truly cares about your experience and the welfare of your children. HIGHLY recommended!

"Dr. Irene is the most caring, gentle, genuine Pediatrician. She is so kind and loving with my boys. She makes them feel so comfortable and they are even excited when we have an appt! She was so quick to respond on the Klara App to communicate with me even during a holiday weekend and answer my questions about my son. She takes time to go over everything and answer all my questions and concerns, every time we've met with her. I've never felt rushed. I highly recommend her! She's been so great caring for my family. I feel so blessed to have been referred to her!! Thank you Dr. Irene, for caring for my kids!"

"Dr. Irene is amazing! She really listens to you and your concerns, and takes the time to address them. She is so gentle and kind with my kids! She has definitely exceeded our expectations! I’m positive that my kids are having the best care on island. We love her and we are so happy that she joined our Maui community!"  via Google reviews

"Dr. Irene is amazing. She is caring, gentle, truly listens and graciously worked with us and our children to provide the best medical care. Highly recommend!!!"